My Activities for the past few years.

It is National Crochet Month (NatCroMo) and it seemed appropriate to create a blog post to celebrate the month and to let folks know what I have been up to for the past few years, and where I stand on future plans.

I haven't done anything for profit over the past few years.  It has been a bittersweet time, having lost an Aunt in summer 2015, having lost my father in November 2015 (Although it was wonderful to spend a little time with family at my father's funeral.).  My son, Paul, is still living off of freelance artwork in Europe and I have reached the age my mother was when she passed away.  I also lost my dear friend and a mentor, Susan Huxley, to cancer in 2016. On top of that, I started 2015 with no voice after my thyroidectomy; my vocal cords apparently had been stretched during surgery and refused to work for 3 months.    With all that going on I lost my initiative to do work.  Instead I mostly did self-indulgent art works. 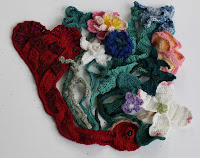 Here are my earlier creations.  The first is my Heritage Heart which I created in 2013 for Prudence Mapstone's Hearts & Flowers freeform knit and crochet show.  Although well before 2015, I am showing it because it is the most meaningful piece I have ever made.  Its base is a heart, reminiscent of those I saw during my high school years in Germany.  The flowers are all symbolic of my heritage, a wild rose for England, an iris for France, a cornflower and an edelweiss for Germany, a double rose for New York, a violet for Wisconsin, and a dogwood flower for Virginia. 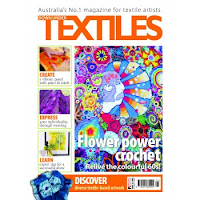 My 2015 "Tribute to Peter Max" contribution to Prudence Mapstone's 50 Years of Flower Power collaborative art piece made the cover of Down Under Textiles in 2015.

In 2015 I made this contribution for an English project called Flowers for the Memories (Alzheimer's research) project.  I wanted to provide something related to Virginia, so I made Virginia bluebells.

My 2015 contributions Kathryn Vercillo's Tribute to Wink (depression awareness).  I used elements of Wink's designs to create my own mandalas.

n 2016, I contributed a crocheted stream, including waterfall to the UK University of Sheffield's Crocheted Hyperbolic Forest: 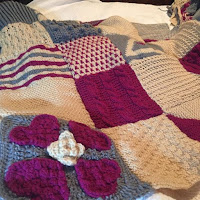 I made a hearts and Irish rose square to Kyle Kunnecke's blanket for his sick mom: 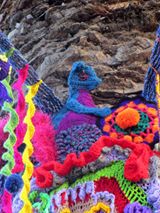 Prudence Mapstone wanted me to contribute to her Jumpers & Jazz yarn-bombing of Australian trees.  I was running out of time and didn't know what to create, but I started out with the bullioned round.  Later, when the squirrels, were scolding me for coming out of my back door--for disturbing them in their maple tree, I decided the bullioned round would make a great squirrel thigh.  Here my squirrel contribution is sitting on top of many other lovely freeform contributions in an Australian palm tree.

I made this Sonoran Sunset (named after the stone cabochon) necklace for myself, although I have not added a clasp yet.

This year I have written my first quarterly article for the Crochet Guild of America (CGOA) Chain Link Newsletter  and I researched and wrote the Feb 16th blog entry in an effort to confirm the tomato/strawberry pincushion story (see that blog entry).  I have participated in Crochetville's NatCroMo, donating 6 lots of vintage crochet books.  It was much easier this year, with Amy Shelton and Donna Hulka organizing all the giveaways.  I have done research and organization of information for the book I am writing and I have made much progress at releasing my Inner Beast.  I have visited Bayfront Park, in Chesapeake, MD, twice, in search of fossils, sea glass, and "mystery beads".  I plan to go on future visits, in search of sufficient numbers of beads to make a mystery-bead jewelry piece.  I also need to ratchet up my organizing of the collaborative art piece that I plan to sponsor: a Freeform Textile Tribute to the Arts.
Back on 4 January I made a prioritized goal list.  I will update that post no later than tomorrow evening.
Posted by Karen C.K. Ballard at 11:42 AM

Karen C.K. Ballard
I am a retired computer professional, pursuing a career as a beading/crochet designer and textile historian. When I was 7, my Great Aunt Laurene taught me crochet basics. Since then I have designed my own patterns and taught crochet. I plan to share my passion for crochet here. I have sewn/embellished historically accurate Colonial and Civil War style clothing, tents and flags. I've made costumes/props for community theatre, as well as designed/sewn wedding apparel. I collect textile production/embellishment tools and will be posting information on textile tools/history topics. Since 1989 I have taken numerous beadworking classes. I enjoy designing beadwork and will share my passion for all beadworking techniques here. Lastly, I am a rockhound. So do not be suprised to see rockhound ramblings as well as explorations of ways to include these treasures in creations. I am the crochet history columnist for the Crochet Guild of America's (CGOA) Chain Link Newsletter and I plan to write a booklet on Collectibles of the WWI and WWII Workbasket Campaigns: knitting, sewing, etc. for military, wounded, and refugees. Feedback on this topic appreciated!